I feel the need…the need for speed.” – Maverick and Goose

What does Top Gun have to do with modern marketing? To understand the connection, we need to tell the story of John Boyd.

Boyd was a US Air Force fighter pilot and military strategist whose theories have been incredibly influential. People have gone so far as to call him one of the most remarkable unsung heroes in US military history and greatest military theorist since Sun Tzu. He was a fighter pilot during the Korean War and helped establish the Fighter Weapons School at Nellis Air Force base—a school similar to the one featured in the movie Top Gun.

Boyd developed a fast-cycle theory, delivered in hundreds of lectures and influencing fields as diverse as military tactics, business competition and business process design, that became known as “Boyd’s Law.” After spending much of my career helping companies implement data-driven marketing, I’m convinced that Boyd’s Law is alive and well in marketing also. 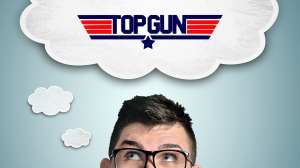 Boyd wasn’t just a good fighter pilot—he was a great one. During the 1950s, combat pilots across the US knew that Boyd had a standing offer for what was know as the forty-second challenge: take a position behind his plane, and in 40 seconds or less Boyd would have his opponent in his own gun-sights or pay $40. Colonel Boyd never lost the bet in more than 3,000 hours of flying.

While Boyd was an experienced pilot with quick reflexes, his invincibility in mock combat came from an insight he developed after the Korean War. Boyd answered a question that had captured his interest during the war. He wanted to understand why the relatively slow US F-86 dominated the far superior MIG-15.

Boyd realized that all fighter pilots go through a cycle of observing, orienting, deciding and acting; something he termed the OODA loop. Boyd’s crucial insight was that the speed with which pilots completed the OODA loop mattered much more that the quality of decisions in each step. That was why the slower F-86 could win out over the faster MIG-15. The F-86 provided better visibility for pilots and could roll faster. The key to winning wasn’t a plane that could fly faster and higher but one that could change course quicker and enable a faster OODA loop. This answer became the foundation for Boyd’s fast-cycle theory known as Boyd’s Law.

What Does Top Gun Have To Do With Marketing?

Personalized, one-to-one marketing has long been represented the “holy grail” for marketing. For years, marketers have sought to present the right offer and message, to the right customer, at the right time, in the right place, and in the right context. Marketing has moved from a “one size fits all” to a “one size fits one” approach—and with good reason. Personalized marketing can be as much as ten times more effective than static approaches and has consistently improved conversion rates, average transaction size, and customer loyalty.

Over many years helping clients implement personalized marketing, I’ve observed some common patterns. Companies building personalization and data-driven marketing capabilities tend to make similar investments. They invest in data infrastructure to integrate information from various marketing channels and customer touch points with their CRM data. These days that often includes investments in Big Data technologies, such as Hadoop and NoSQL data infrastructure, to deal with the growing amount of data as well as increased variety and complexity. Companies also typically build centralized repositories of offer and message data to improve consistency across channels. And, they often invest in some form of decision engine that can make personalization decisions in real-time. These investments represent the new “hierarchy of needs” for modern, data-driven marketing and take the form of the example below.

One of the most important factors in the success of personalized marketing, however, is speed and agility. The faster companies can execute “test and learn” cycles—where new offers, messages, treatments, and rules are implemented, evaluated and improved—the better the results.

In fact, personalization that includes these fast cycle times will often perform better than personalization that uses better decision engines, more sophisticated rules and segmentation strategies, or higher quality data. On the surface, this phenomenon seems counter-intuitive. That is, until you consider Boyd’s Law. Here’s why I believe speed and agile are new imperatives for marketing.

Many large, Fortune 500 companies have invested millions of dollars in their personalization capabilities. These companies have some of the best data analysts and data scientists, robust data, and extremely sophisticated rules engines to drive marketing messages and offers. However, this level of sophistication often includes a hidden downside: complexity. The complexity of the decision rules, the technology environment and data infrastructure means that it can take months to execute a full “test and learn” cycle. In other words, it can take several months before teams understand how the offers, creative elements, messages and decision rules are performing and can makes changes to optimize performance. Over the course of a year, these companies are lucky to execute three or four “test and learn” cycles.

On the other hand, I’ve worked with companies that have implemented much less complex and sophisticated (and often much less costly) approaches to personalization that have performed extremely well. Compared to static approaches, these implementations have led to dramatic increases in conversion rates and average purchase amounts—often in six months or less. On the surface, this is just as puzzling as the dominance of the F-86 over the MIG-15 was to John Boyd. In both cases, the answer is the same: fast cycle time and agility. When implementing personalization, these companies optimized for business process and cycle time rather than sophisticated decision engines, segmentation strategies, and business rules. Rather than a “test and learn” cycle of months, these companies implement “test and learn” cycles in a day or week.

Process Is The New Black

The key takeaway from John Boyd is clear. While it is tempting to over-emphasize data and technology when implementing data-driven, personalized approaches, it is important to keep in mind that these are only foundational elements. Companies will be best served by optimizing for rapid “test and learn” cycle times, even if this means starting with less sophisticated data and analytics. While fast cycle times are more challenging to implement, the payoff is significant. Granted, process isn’t generally the most exciting topic for marketing and technology folks. But, when optimized processes and rapid cycle times deliver higher conversion rates, revenue, and competitive advantage, the results are very exciting indeed.